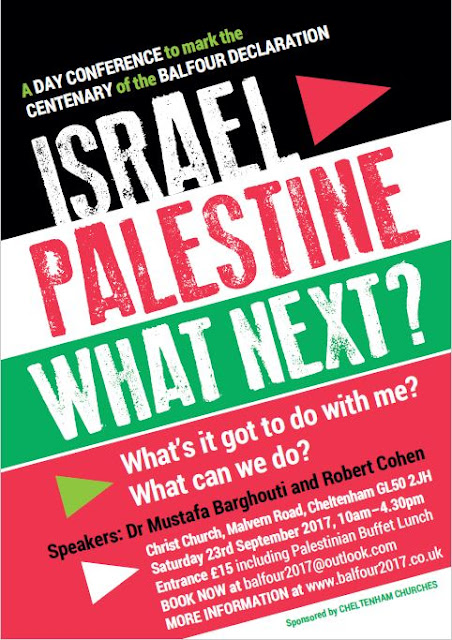 "His Majesty’s Government views with favour the establishment in Palestine of a national home for the Jewish people, and will use their best endeavours to facilitate the achievement of this object, it being clearly understood that nothing shall be done which my prejudice the civil and religious rights of existing non-Jewish communities in Palestine."


150 people gathered together in Cheltenham on Saturday 23rd September 2017 to mark the centenary of the Balfour Declaration. The Conference highlighted the rights of the Palestinians which still remain unfulfilled a century after Balfour. It did not call into question the legitimacy of the State of Israel, but sought to increase awareness of the Palestinian plight, and the hundred years of suffering caused by the British Government’s failure to implement the final clause of Balfour’s declaration. It drew together speakers who were Jewish, Christian and Muslim.

The Rev Nick Davies, Area Dean of Cheltenham and Vicar of St Philip and St James, Cheltenham introduced the Conference


Recordings of the Talks

... is one of the foremost leaders of the non-violent struggle of Palestinians against the occupation. In the Palestinian presidential election of 2005 he polled 30% of the vote. Dr Barghouti founded the Palestinian Medical Relief Society which provides healthcare for marginalized Palestinians. It employs 360 professionals and 38,000 volunteers working in 490 Palestinian refugee camps and villages.

... is Rector of St. Andrew’s Church, Ramallah and St. Peter’s Church, Birzeit in the Episcopal Diocese of Jerusalem. Born and educated in the West Bank, Fr. Diab received his theological degree at the Near East School for Theology in Beirut, Lebanon in 1997. He was ordained as a priest in the Episcopal Church of Jerusalem in 2001. He is founder of the Youth Connection for Peace Program, and is a member of the Palestinian-Israeli Theologians Forum.

... is one of the leading Jewish dissident voices in Britain. His writing challenges mainstream attitudes on Israel/Palestine from a firmly Jewish perspective. His work is published in the UK by Jews for Justice for Palestinians. Robert describes his monthly blog ‘Micah’s Paradigm Shift’ as ‘Rescuing the Hebrew covenant one blog at a time’.

Alex Chalk, MP for Cheltenham, gave his response to the conference

At the end of the day, Nick Davies drew the threads together and brought the conference to a close in prayer. 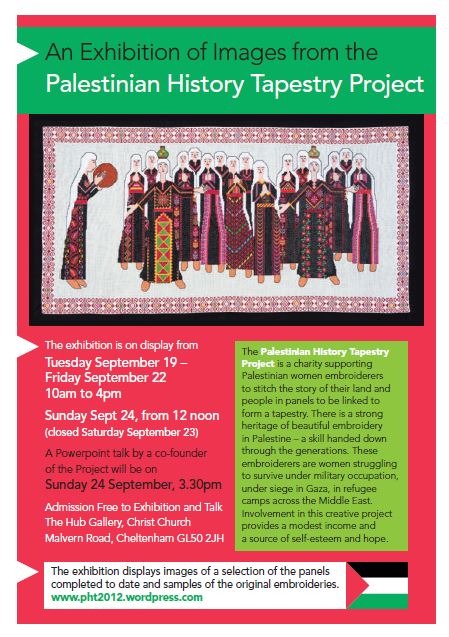 The Palestinian History Tapestry Project is a charity supporting Palestinian women embroiderers to stitch the story of their land and people in panels to be linked to form a tapestry.

There is a strong heritage of beautiful embroidery in Palestine – a skill handed down through the generations. These embroiderers are women struggling to survive under military occupation, under siege in Gaza, in refugee camps across the Middle East.

Involvement in this creative project provides a modest income and a source of self-esteem and hope.

A wonderful exhibition was held at the Hub Gallery, Christ Church, alongside the Day Conference.

To find out more about the Palestinian History Tapestry Project click here to go to their website.

Email ThisBlogThis!Share to TwitterShare to FacebookShare to Pinterest
Home